The “Green Transition” – a quick backdrop

“Green Transition” is one of seven long-standing structural investment themes identified by Fullerton as having an enduring, long growth runway ahead. The other six being (i) Technology, (ii) Healthcare, (iii) Cash Generators, (iv) Experiential Lifestyle, (v) Geopolitics, and (vi) Inflation Beneficiaries. The shift to renewables and cleaner energy is sparking increased demand for alternative energy sources, from solar to wind, to geothermal avenues.

This update focuses specifically on solar – examining the feasibility of this energy source as a viable substitute for fossil-based fuels, its adoption rate, the road ahead, as well as the investment opportunities this transition entails.

Theoretically, according to a group of researchers at University College Cork in Ireland, if every rooftop on the planet were installed with a solar panel, this would generate a total of 27 petawatt hours of electricity per year, more than the combined electricity consumption of the world in 2018*.

But is this practicable? as it would involve a total surface area of 0.2 million square kilometres – an area almost equal to the size of the UK**, not to mention the cost of installation of these panels. The scenario described here is an extreme example of course, but it does not discount the possibility of solar being a viable alternative energy source to supplement and eventually overtake current capacity from traditional energy sources.

The journey so far and the present environment

As is the case with most new technologies, the early adopters usually experience steep implementation cost. With solar, in the early years of adoption, government subsidies were needed to make economic sense. However, with the passing of time, and as solar became increasingly widespread and reached critical mass, economies of scale started to set in and the installation cost of solar declined to be more competitive.

More cost competitive producers in China, who now dominate the solar photovoltaic (PV) panels manufacturing scene, have also brought the costs down. As it stands, solar is now more cost competitive compared to other traditional energy sources like coal and gas (see Figure 1) and can be installed relatively effortlessly without the need for subsidies today.

Supportive government policies, like the recent “Inflation Reduction Act” in the US which aims to cut emissions and slow global warming, may further make inroads in encouraging the adoption of alternative energy sources like solar. The Act looks to cut US emissions by accelerating the deployment of clean electricity and vehicles, where wind along with solar energy have been identified as having an instrumental part to play in this transition.

In addition to reduced cost over time and supportive policies, the increased push to reduce the reliance on traditional sources of energy like natural gas, which is now accelerated by the Russia-Ukraine conflict, will further serve to push the move to more alternative energy sources – like solar to the forefront.

Incidentally, the International Energy Agency (IEA)’s Renewables 2020 report estimates that wind and solar is expected to displace coal as the largest energy source to the world by 2024*** (see Figure 2).

Figure 2: Wind and solar capacity (in gigawatts) expected to overtake gas and coal as the largest energy source by 2024 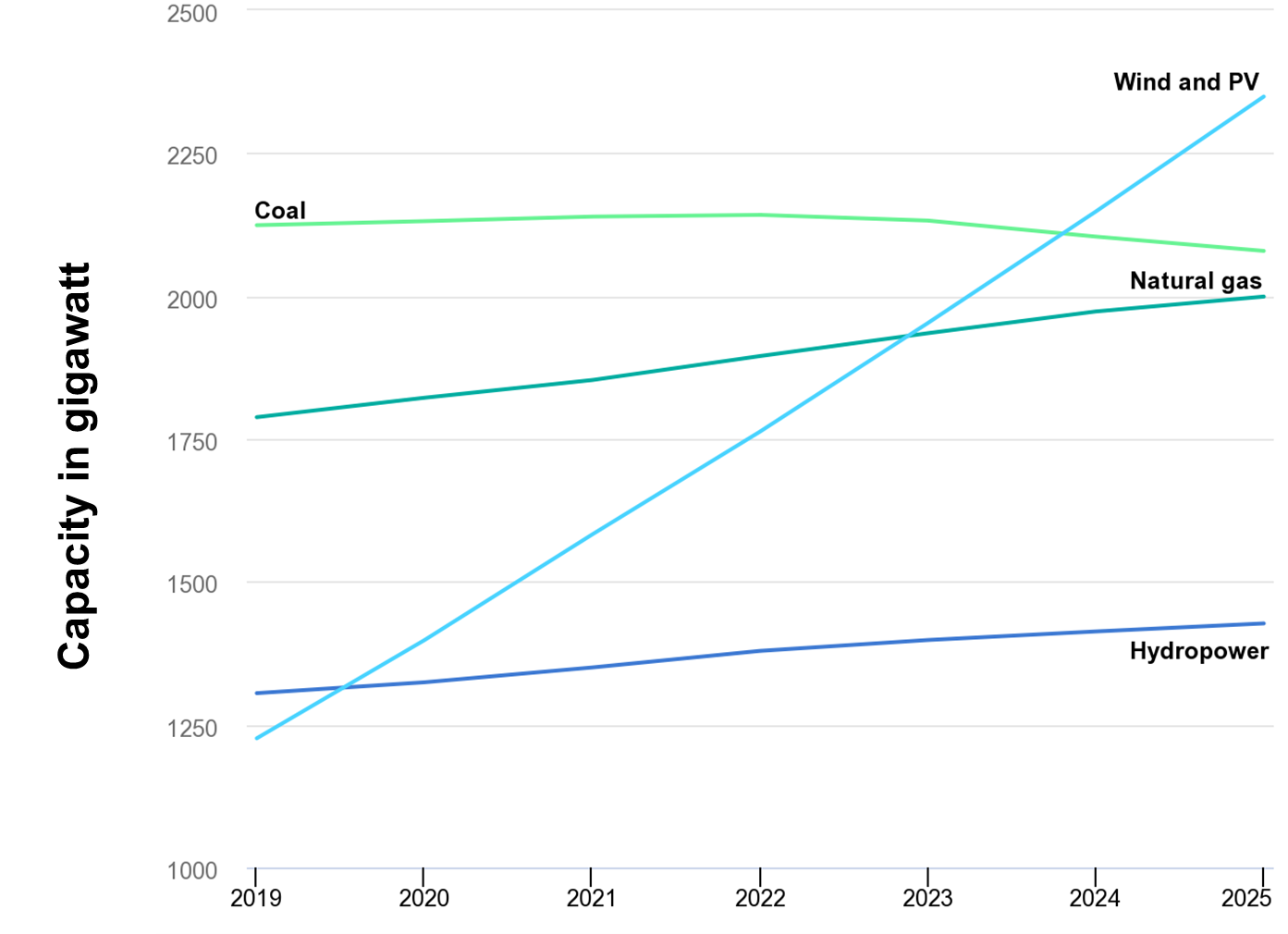 The solar industry today – the key players, motivations driving demand and the outlook ahead

Given solar is expected to be a big part of the renewables energy equation, it is imperative to understand the dynamics shaping the outlook for this industry, as well as the key players that are well positioned to benefit from this emerging trend.

As it stands, China is a key supplier in this industry, being the largest manufacturer of solar PV panels in the world. Its sheer scale and size means it is able to produce these panels at competitive cost levels that few competitors can match and take market share away. That being said, the cost of solar PV modules have increased over the past two years by over 20%^ as the costs of some raw materials – like polysilicon, has risen significantly. Notwithstanding the price increase, this is not expected to slow the adoption of solar in its key markets as the cost of other energy sources, like gas and coal have risen much further. For example, while solar PV modules have increased by c. 23% from 2020 to August 2022^, coal prices have more than quadrupled^^, and natural gas prices in selected key European trading hubs have risen by about ten-fold^^ over the same period.

Moreover, the intention to be increasingly detached and independent of Russian gas continues to underpin the demand and shift to solar. For these reasons, solar farms especially in the EU and US, have been able to pass on the increased cost to consumers.

Beyond the near-term and cyclical developments shaping the outlook for solar, global demand for this renewable energy source is expected to remain firm. Fullerton expects total solar capacity installation to grow by over 20% per annum from 2021 to 2023, and to exceed 250 gigawatts in 2023, compared to the 168 gigawatts recorded in 2021. This is predicated on Fullerton’s bottom-up analysis in selected key markets, driven by estimated demand in locations like China, the EU (notably from Germany), and the US (see Figure 3).

On the supply-side, while on the surface rising demand for solar may potentially translate to all-round opportunities for manufacturers, one still needs to be selective. This is because almost every sub-component manufacturer in the solar supply-chain sector, has been ramping up capital expenditure and expanding capacity in recent years, potentially resulting in a situation of overcapacity and reduced operating margins in most solar sub-segments. There is however less competition in the inverters segment as this tends to be a more concentrated sector with fewer players, and as such the operating margins are expected to be more stable over time. Inverters are devices that convert Direct Current (DC) electricity to Alternating Current (AC) electricity and are seen as the most important piece of equipment in the solar energy system.

Separately, while we noted earlier that polysilicon prices have increased in recent years, this is expected to trend down and normalize from Q4 2022 onwards. Should this happen, this would be beneficial for the module producers and selected utility companies.

With regards to solar farms, there are also disparate opportunities across different geographical locations. The dynamics now is such that there are more attractive opportunities for US and European solar farms as compared to the Chinese and Indian solar farms given there is stronger demand in the Developed Markets and the ability to pass on the higher cost there. On the other hand, there is less flexibility to increase prices in China at the moment, while India’s market is overly competitive at this point, reducing the profitability prospects ahead.

In summary, the green energy transition, sparked by various impetus from climate action, to energy security, is spawning opportunities in the renewables space in industries like solar energy. This is an area with a meaningful and sustainable long growth runway ahead as economies transition to cleaner energy sources.

Increased demand for solar based energy as the cost of solar becomes more competitive with rising adoption means this energy source is here to stay, and likely to see sustainable growth going forward. While the longer-term structural outlook appears sanguine, there are still cyclical factors, and considerations that investors need to continually assess and pay attention to, in order to potentially pick selective winners in this space.